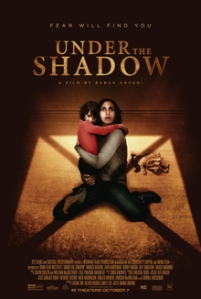 Under the Shadow (2016) depicts a mother and daughter struggling to maintain a normal life in war-torn 1980s Tehran. After their father and husband is conscripted, Iraqi bombs start raining down. In a visually striking moment, one bomb lodges in the building’s roof: it doesn’t explode, but it seems to bring a mysterious evil with it that begins to tear the family apart.

This BAFTA award-winning horror has long been on my “must watch” list. Sadly, I’m no longer a freeloading undergraduate with cash and time to spare, so I couldn’t catch it at the cinema. Luckily, Netflix bought it — a surefire sign that the film was gold — and I got to watch it this weekend.

Called an “Iranian Babadook” due to its slow build and psychological horror element, this film holds a 7.0 on IMDB and 98% fresh on RottenTomatoes — rarely heard of scores for a horror. Foreign language? Check. Original setting? Check. Social commentary? Check. Mark Kermode approved? Check. It’s everything that a latte-supping cosmopolitan liberal like myself should love. And how I wanted to love it. But this was the single-handed most disappointing film experience I have had in years.

Where The Babadook was a nerve-shredding slowburn, Under the Shadow was just a patience-shredding slow. 82 minutes never felt so long. The film wasn’t awful: jaunts to the basement bomb shelter were creepy, the sound design was at times deeply unsettling, and the evil presence was original and truly scary. But unlike The Babadook which nigh-on perfectly balanced psychological terror, monster scares, and possible mental breakdown in a is-it-isn’t-it-real stylee, Under the Shadow just felt like a going-nowhere social commentary on the state of women in post-revolutionary Iran with a bit of bump-in-the-night thrown in. Tension wasn’t maintained, the film didn’t feel like it was headed anywhere, and our mother and daughter, strangely, never truly seem imperilled by the menacing presence. The picture juggles several themes, yet never delivers on any of them. Smaller productions often suffer from fewer rewrites, Under the Shadow is no exception: this is a screenplay crying out for another round or two of redrafting. It never fulfills the ample potential it hints at.

However, the acting, direction, clever construction, and originality save the film somewhat. Memorable, note-worthy, but sadly Under the Shadow just doesn’t hang together. 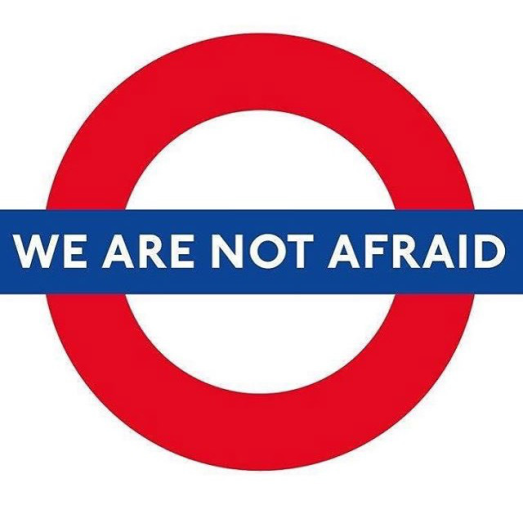 London has always been attacked by terrorists. We know that. But this never has, nor ever will, stop us leading our lives freely. I can say hand-on-heart: WE ARE NOT AFRAID.

… the SNP and Scotland are not the same thing …

I am a unionist … but I am a democrat above all else … if Scotland wanted to leave the UK, then it is undeniably right that they should leave … Yet now demonstrably is not the time for another referendum.

I’ve lost all respect for the Scottish National Party. They are acting like opportunistic, hateful scum. None-the-less, I still 100% respect the idea of Scottish Independence; let’s not conflate the SNP and Scotland, as if they were the same thing, even though Sturgeon and her motley crew keep trying to blur the distinction.

I want to be clear about something.

Yes, I am a unionist and believe that the four nations of the UK are better off together. However, I am a democrat above all else. And even though it would break my heart, if Scotland wanted to leave the UK, then it is undeniably right that they should leave, although I would bid them adieu with a tear and a friendly handshake. See my posts about the 2014 Scottish Independence Referendum for more about my views.

But now demonstrably is not the time for another referendum. SNP leader Nicola Sturgeon talks about the “democratic outrage” of not being allowed to hold another independence reference by 2018-2019. But I think the only outrage is her behaviour and that of other SNP top brass.

In short, the Scots are a nation and not a county of England — as Alex Salmond absurdly recently claimed is the opinion of those against doing IndyRef2 in the SNP’s timeframe of 2018-2019. And thus, they have absolutely the moral right to another referendum. Luckily, the UK government is more enlightened than, say, the Spanish government, and we’re happy to give a binding referendum to Scotland. But this timeframe of 2018-2019 is absurd. It is political opportunism. Let’s wait until the next parliament. If there is wide enough support for another referendum, then let’s crack on with Indy Ref 2!

The Electoral Reform Society and others claim that we need an elected upper house in order to be fully democratic. But I say that they have confused democracy with vote-ocracy.

Today’s papers are full of a periodic favourite: how the House of Lords needs to be reformed. Reports of one peer who left a taxi waiting whilst he went inside just to sign in for his £300 daily expenses only to then nip off again in his taxi (!) have (re)surfaced. The Electoral Reform Society, who I largely agree with and support, have called for an elected House of Lords.

The House of Lords is a total mess. No doubt. Packed with cronies, those with conflicts of interest (taking EU pensions whilst voting on whether we should leave the EU!), and lazy sods who turn up for their dole. The place is an anachronism. And it’s a great pity that Labour could not finish the reform job they started in 1997; if they had prepared for government a bit more, maybe they would have.

But electing members of the Lords is not the solution. In fact, it would make things worse.

Why replicate the elected Commons? Why have yet more elected careerist politicians?

The Electoral Reform Society and others claim that we need an elected upper house in order to be fully democratic. But I say that they have confused democracy with vote-ocracy.

If not an elected Lords, then what?

The Lords is supposed to be a politically neutral, disinterested, body of wise counsellors, who have no vested interests, who are not career politicians, and who act as a sober check on any possible elected dictatorship of the Commons. But how to get such a House?

Clearly, elections corrupt the system and invariably lead to politicising. Not merely my words and thoughts, those of the founding fathers of the US. The ancient Athenians and Romans knew this, too, which is why leading figures were selected by sortition (out of a hat, as it were, like jurors are nowadays) and were limited to a single one-year term.

Thus, there are intricacies involved in reform, but I put forward the following as a sound basis.

This sort of thing seems like a reasonable compromise which would achieve what we want of the Lords — and most importantly, doesn’t confuse vote-ocracy with democracy.

Under the Shadow (2016) sees a mother struggle to maintain a normal family life in war-torn 1980s Tehran amidst Iraqi bombs and a mysterious evil presence.

BAFTA award-winning, foreign language, original setting, social commentary, Mark Kermode-approved: everything a latte-supping cosmopolitan liberal like myself loves. Yet this Iranian The Babadook doesn’t quite work.

Where Babadook was a nerve-shredding slowburn, Under the Shadow was just a patience-shredding slow. Babbadook‘s is-it-isn’t-it-real psychological terror has been replaced with going-nowhere social commentary on feminism in post-revolutionary Iran. A truly scary “monster” and creepy apartment building can’t hide the lack of focus or peril. Disappointing.