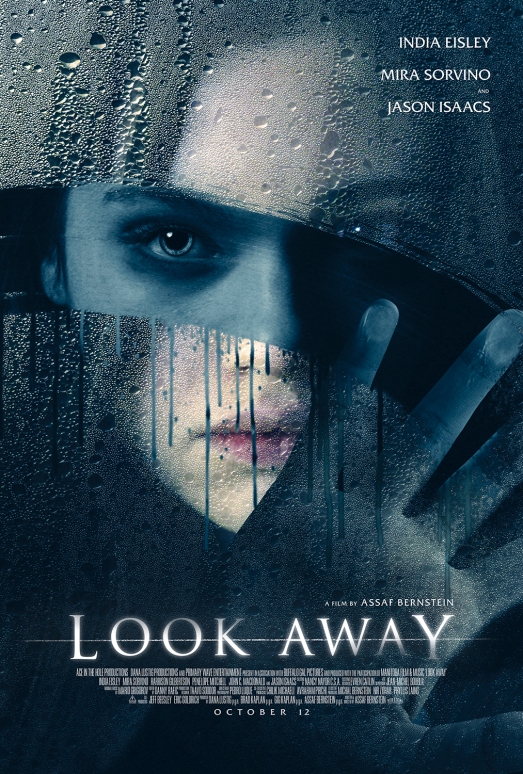 Maria (India Eisley) is a quirky and lonely teenager, bullied and suffering a barely-fleshed out eating disorder, her only friend is merely using Maria as a personal side-kick and as a kind of depressive foil to make herself look good. A depressed mother (Mira Sorvino) and a philandering plastic surgeon father (Jason Isaacs) make home life equally unbearable. But everything changes when Maria looks in the mirror to see that her reflection is alive. The reflection is called Airam (because, ya know — I mean, work it out for yourself!) and claims to have Maria’s best interests at heart. But does she/it really? Things take a turn for the dark when they swap places.

There’s no real tension regarding who or what the reflection is, the very first shot of the movie spells it out: Airam is Maria’s twin sister who died at birth. There also isn’t any real tension to the way Airam gets justice for Maria. Justice would be served, and I would just go, “Oh, okay, so that’s happened, I guess.” There felt like minimal pay-off. There could have been a slow build-up to key scenes of “justice”, there could have been a creepier tension built between Maria and Airam. Jason Isaacs does steal the movie, however, with his off-kilter and complex portrayal. The film missed another pay-off with certain revelations regarding Airam’s true fate/identity; this twist was shocking, but I was more shocked at how poorly the film played this strong card. There’s an awkward aggressively sexual scene between Maria and her Dad, but this, too, felt like it could have gone in a more interesting direction.

This was an entertaining film, but it kept me wondering why they didn’t explore the concept more. What happens to Maria when she’s in the mirror? Is there a whole other dark world in there, like ours but the opposite? Or is it happy and light, making her not want to come back while Airam is unhappy in Maria’s world? Why wasn’t justice performed more ironically; for example, why was Maria’s school tormenter not, despite having a secret crush on her, punished in a way fitting his relationship with Maria? He just gets kyboshed. And why isn’t Maria made to be more likable? Self-deprecating sense of humour, perhaps. An interesting hobby, maybe. She’s just pathetic and characterless.

Nice idea, some good acting, an entertaining albeit mindless way to spend 103 minutes, but devoid of tension. A Horror-thriller without much of either. The ending also felt incomplete. This film is a wasted opportunity.