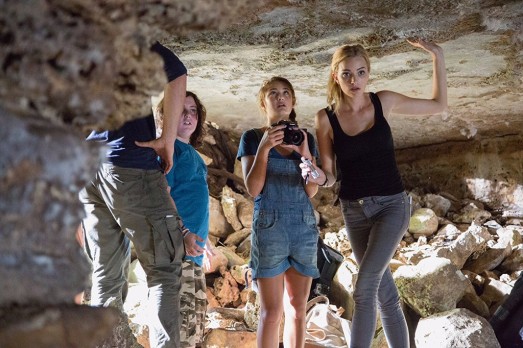 A group of adolescent friends go on a jaunt to a hidden cave in the woods in order to find their missing teacher. It’s an accident waiting to happen, something the characters themselves point out several times. And yes, they inevitably do end up getting lost in the cave network themselves. But this Goonies gone awry quickly becomes The Descent-with-teens; what they find down in the dark is beyond any of their imaginations and will change their lives forever in ways they couldn’t conceive.

Time Trap is basically a B-movie which was shot on a limited budget of $1,000,000, a paltry amount — especially for a Sci-Fi flick. Yes, this is a sci-fi movie. However, the special effects weren’t bad at all, and the make-up was impressive, too. The acting wasn’t amazing. But despite being a bit teen movie, it worked.

The film felt like an over-extended episode, perhaps the pilot, of a 1990s Sci-Fi show. Which is both good and bad. Action, drama, thrills, but a total reset by the end of the episode. Which was a bit of a let-down.

Despite a lack of budget and a ’90s TV vibe, it was an absolute mind-bending pleasure. It dealt with huge themes, which totally shocked me. As pretentious as it sounds, I was reminded of Olaf Stapledon’s magisterial 1930 novel Last and First Men, an aeons-spanning epic like no other which inspired many, including the great Arthur C. Clarke. That really does sum up the themes hit upon in this movie. Awesome stuff. However, the film starts out with no hint of such a direction. It begins as a kind of teen adventure movie in the mould of the Goonies (which was meta-ly referenced by the characters themselves), but transforms into a truly terrifying science fiction horror. This tonal shift worked quite well; much better, in fact, than the campy tonal shift back to adventure comedy at the very end. This ending, a happy ending of sorts, felt like it thoroughly undermined the true mind-melting horror of what happened in the caves. Hence the “90s Sci-Fi show” vibe.

B movie, yes, but a true delight.