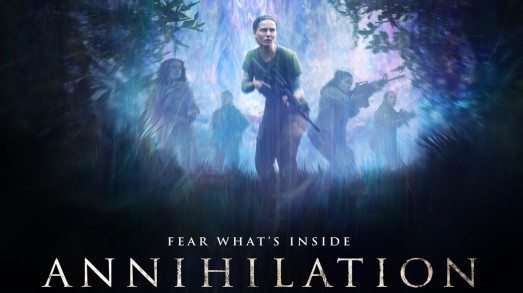 check out my new film, TV, and Netflix review blog at www.filmmovietvblog.wordpress.com

An isolated area of countryside is cut off from the world by an eerie shimmering light which surrounds it; no one who enters “the shimmer” is heard from again. Communication in and out of the shimmer is impossible. And with the shimmer slowly growing in size daily, engulfing the surrounding area, the government is called in to carry out a classified investigation under the guise of a chemical clean-up operation.

An all-female team, led by a biology professor (Natalie Portman) and a psychologist (Jennifer Jason) Leigh, each with their own agendas and ulterior motives, are the latest to enter. The world they find within the shimmer is an Alice-in-Wonderland, LSD trip gone wrong. A nightmarish hallucination, which is both utterly unlike anything you’ve seen before, and completely convincing.

The film is a genre-defying science fiction-horror-thriller-psychological thriller-creature feature which shares genetic strands with Sphere (1998), Event Horizon (1997), Contact (1997), and Cloverfield (2008). But this is all par for the course for writer-director, Alex Garland, whose previous accomplishments include Ex Machina and 28 Days Later.

This film is tense and, yes, genuinely scary. A horrifying slow-burn with some first rate acting.