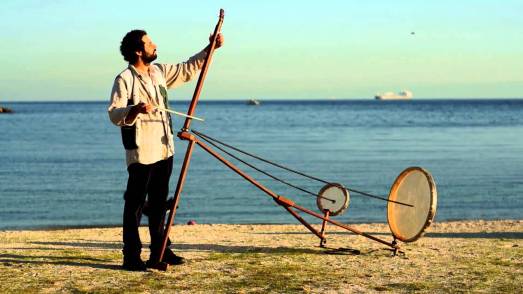 Mark Kermode mentions that a unique musical instrument called the “Yaybahar” is used in the film Hostiles. He said only one existed in the world at the time the film was made and that the sound is unlike anything else; this piqued my interest. So I looked it up on YouTube. Seriously, the inventor of this musical instrument, Görkem Şen, is some kind of genius. I’ve never heard anything like this before. Incredible. Watch and enjoy.

Arrival sees a linguist tasked with making first contact with extraterrestrials. Based on an award-winning short story, the film can only be described as this generation’s Contact or 2001: A Space Odyssey. Same epic feel, familiar dark featureless monoliths (spacecraft). Yet it’s no rip-off.

Truly alien aliens, a tension and uneasy terror that surely would acccompany first contact, a disturbing sense of realism. All achieved without wobbly camcorder shtick.

Arrival, based on Ted Chiang’s 1998 Nebula award-winning novella  Story of Your Life, can only be described as this generation’s Contact or 2001: A Space Odyssey. There are even shades of 1998’s Sphere. It’s not derivative of those great works, but has the same epic feel — and by “epic”, I don’t mean bloated and poorly plotted, which is what so often passes for epic nowadays (see Superman v Batman, Pirates of the Caribbean: At World’s End, and a 300 page book being turned into a three film, eight hour monstrosity, The Hobbit).

Aliens have landed, but they keep quiet, safely ensconced in their ships. What’s their intention: Close Encounters of the Third Kind, or more War of the Worlds? The film sees linguist Dr Louise Banks, so well-played by Amy Adams that I forgot I was watching a well-known A-lister, tasked with deciphering the alien’s language and making first contact. Her job cannot be underestimated: these aliens are no humans-with-rubber-ears.

Truly alien aliens, a sense of tension and uneasy terror that surely would acccompany first contact, a disturbing sense of realism. And it achieves this without wobbly camcorder shtick. With a nod to 2001 and Sphere, it even has its own monoliths — gigantic, featureless, silent, dark spaceships which float mere feet from the ground.

And just like its illustrious spiritual forebears, Arrival is beautifully understated, deceptively straightforward in its plot, and deals with deep themes with no hint of pretension or pomp. It even raised a few laughs from the audience. Perfectly pitched mind-candy. The only minor criticism is that the film might have benefited from upping the personal and global peril in places.

It really is the anti-Independence Day. If you are one of those people who described Contact as snooze-inducing where nothing happens and “in the end it turns out her dad was an alien” (quote from South Park, not actually what happens!), then give Arrival a miss. However for me, as a fully qualified linguist, I hope this is the start of a glut of films where knowledge of valency changing operations and morphosyntactic alignment in obscure New Guinea languages saves the world. Grammar has never been this exciting, or important. An instant classic.