To keep my language learning on track, I’ve been doing regular updates. Read all my Project Polyglot Parry posts here.

I’m very proud to say that I completed the English>Swedish tree in Duolingo on 29/10/16! 😀 They even gave me this handsome (virtual) trophy!

My next goal is to complete the Duolingo English for Spanish speakers course. At my current rate of two-three sessions a day, I reckon I can finish the new tree by the end of March. And after that, I want to get to the maximum level possible on Duolingo in Spanish and Swedish: level 25 (that’ll take a while, though).

Here’s the private note I wrote myself in January 2016 to keep focused. Spelling and formatting as in the actual note. Never looked at it till now, so kinda defeats the purpose. Anyway, in red ink (‘cos red = emergency and thus unforgettable, so went my thinking) it reads:

If I want to achieve my creative and linguistic goals, I need to dedicate SUFFICIENT time EVERY DAY.

…… I don’t have the time. Therefore, I need to think how to filter this time throughout the day, e.g., vocab. cards on the train.

–> Swedish, Spanish, and….. Other langs = only Memrise. But langs I am serious about, do above.

Can’t say I disagree with my own conclusions. But I’ve been very inconsistent.

I need to start setting myself SMART Goals for 2017. That is, goals which has are distinct and definite parts so I can measure my success, and a predetermined timeline to do them by. All of my above goals, despite specified time to be spent, are still a tad vague.

Also, speaking for myself, I find I work very well when I have a series of deadlines stacked up and am forced into planning more. Hence why I tend to do well on courses and in work-based assignments. Hmm, maybe there’s a lesson there for 2017…

As you might know, I’m struggling to fit an ever-busier life into the 24 hours that this selfish Tory government has deemed fit to give us. Things can’t go on as they are: I’m barely keeping up, and I am spread thinner and thinner over more and more toast. I need to develop SMART Goals to sort myself out.

If I don’t pull my finger out? Then the following brilliant song’s words will be my epitaph. I’m talking about Time by Pink Floyd from their classic 1973 album The Dark Side of the Moon. I keep listening to the song right now to try and spark me into success.

Ticking away the moments that make up a dull day
You fritter and waste the hours in an offhand way.
Kicking around on a piece of ground in your home town
Waiting for someone or something to show you the way.

Tired of lying in the sunshine staying home to watch the rain.
You are young and life is long and there is time to kill today.
And then one day you find ten years have got behind you.
No one told you when to run, you missed the starting gun.

So you run and you run to catch up with the sun but it’s sinking
Racing around to come up behind you again.
The sun is the same in a relative way but you’re older,
Shorter of breath and one day closer to death.

Every year is getting shorter never seem to find the time.
Plans that either come to naught or half a page of scribbled lines
Hanging on in quiet desperation is the English way
The time is gone, the song is over,
Thought I’d something more to say.

text of lyrics courtesy of http://www.pink-floyd-lyrics.com/html/time-dark-lyrics.html

As you may know, life just seems to keep getting busier and busier the older you get. More responsibilities and that. Right now, I’ve got so much to fit into my day, I don’t even know how to do it. I desperately need to find a SMARTer way of working. END_OF_DOCUMENT_TOKEN_TO_BE_REPLACED

I’m learning two main languages, Spanish and Swedish. I’ve been using Duolingo to learn them of late (in fact, I’m more-or-less relying on Duolingo at the moment, which isn’t good; you should use more than one resource to give you good variation). I’ve been doing around 30 minutes a day for each language, which is the bare minimum you should do.

If you know how Duolingo works, I’ve just managed to fully regild my completed Spanish tree. Which is great news. Next steps:

This will make me firmly intermediate in level. I should have started step 3 by Summer 2017, and maybe completed step 4 by the following summer. When Finish step 4, I’ll work out the best way to keep that level and build on it. The ultimate goal is to be C2, of course.

I was stuck on Swedish for a long time. I kept mucking up infinitives and this sapped my energy. But I’ve been powering on lately. Moving onto new topics has got me pretty excited. In particular, I have loved getting to grips with the kommer att future form and the håller på present continuous. There’s a lesson for you: don’t get bogged down on troublesome topics, as it will kill it for you. Just keep moving.

I hope to have finished the tree by 30th November. So my middle-term plan is thus:

Project Polyglot Parry: my personal quest to turn myself into a multilingual maestro. But I haven’t really applied myself to the task well of late. So one of my major new year’s resolutions for 2016 is to get back on track with my language learning. Part one of which is to start regularly doing Duolingo in Spanish and Swedish again. Well, I have now started.

One of the best ways of sticking to personal goals is to tell everyone. This way, social stigma forces you to see it through. Consider yourselves told.

Project Polyglot Parry is me turning myself into a multilingual maestro. Unfortunately, despite being pretty regular on Duolingo, the graphic below(PROJECT Polyglot Parry March 2014) is still an accurate reflection of my language levels. How can that be possible? I’m where I was 22 months ago! Ah yes; a combo of not enough practice and not pushing myself enough when I do practice. Well, learning languages is on my 2016 New Year’s Resolutions, so I’ve got to get a grip. Enrolling on a class might be the way to force myself forward.

I don’t want to make excuses or put things off, but I am actually in the middle of several really important life things right now. I physically don’t have that much time. But I’m going to force myself to Duolingo again, effective immediate; I can do it on the bog (half an hour per language per day). Then I reckon in a couple of weeks or so, I can think about enrolling on classes and so on.

My ultimate goals for 2016 are to get myself the certificates and/or level of:

As much as I’m keen on Basque — I’ve always loved the language, my wife is Basque, we have a house in the Basque Country –, I decided to only focus on learning that when I am certified C1 in Spanish.

I’m very proud to say that I’ve completed the English>Spanish tree in Duolingo! 😀 They even gave me this handsome (virtual) trophy! 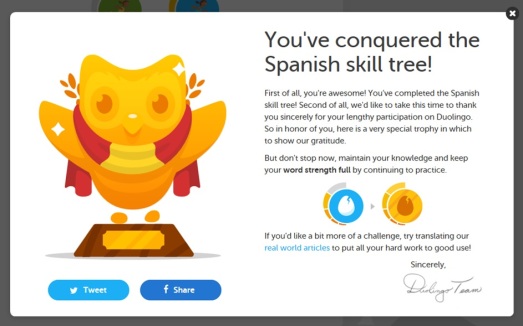 Apparently I can now read 66.7% of all real written Spanish.

My next goal is to complete the Duolingo Swedish tree / course. At my current rate of two sessions a day, I reckon I can finish the Swedish tree by around 1st June. And after that, I want to get to the maximum level possible on Duolingo in Spanish: level 25 (that’ll take a while, though). 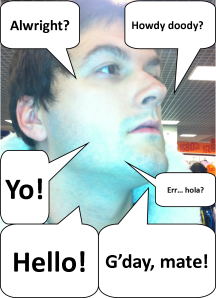 I’m an English teacher, linguist, and language nerd. However, I can’t speak any foreign languages; well, not properly anyway. I really do get turned on by reading about grammar and how different languages have differing strategies in how to approach any given area of communication. It thrills and delights me. People see my interest in languages and assume I’ve reached a pretty decent level in several. So they’re always disappointed to find out I only know English. “So, you’re not really a linguist then, are you?” they aggressively assert, apparently angered by being swindled out of what they thought was a genuine encounter with that most impressive and rare of beasts, a polyglot, an English polyglot to boot! I always retort that the greatest living linguist, Chomsky, only speaks English. Well, that’s nothing more than a grown-up version of the child’s comeback that,”I am rubber, you are glue…” Doesn’t convince me, doesn’t convince them, barely saves face. And Chomsky’s getting on, so I won’t even have that lame retort for much longer.

My problem is that I’m such a procrastinator and I always find an excuse to get distracted before I achieve my goals. I genuinely think I’ve got some kind of climax fear; I’m a bit of a perfectionist and this often holds me back. It manifests itself in all areas of my life; for example, chess: I always set up my pieces into a solid defensive formation, a real fortress, and then what? I just sit back and wait for my opponent to make a mistake. I get a kind of performance presure paralysis when it comes to me taking the first move. I think, when you get down to it, I’m generally scared to take the initiative because then it opens me up to possibly failing. It’s like I’d almost rather do nothing, and blame my crummy circumstances on everything else, than take the jump and put myself out there to get knocked down. My Dad was highly competitive, too, and would always say, “If you come second, you’re still a loser”. Nothing was good enough but perfection. Combine that with shyness and my Mum’s procrastinatory skills, and bam! Thanks, Mum and Dad! Reminds me of the Larkin poem This Be The verse.

They fuck you up, your mum and dad./
They may not mean to, but they do./
They fill you with the faults they had/
And add some extra, just for you.

But I’m tired of dreams filling my head, dreams I never come close to accomplishing or even acting on at all.

And so, in the year in which I’ll hit the big three-oh, I’ve decided to get a grip, at long last, and achieve my goals. And this time I’m for real; I’ve even bought a plastic ringbinder. I have moved beyond, ‘failure is not an option’, to, ‘even failing is a sign I am moving’. And moving is the first step towards moving forwards. So let’s start failing forwards instead of failing through inaction.

There’s several languages that I’ve had a desire to learn for a long time now. But let’s just limit myself to languages I’ve already got some real knowledge of. Currently I know:

In order to keep me on track, I’m going to spell out my goals and have a yearly update on my progress. My five year plan (language-wise, at least), so to speak, is to:

So, I’ve written it down, now: the Internet Gods will not be best pleased if I give up. Check back in a year to see how well I am failing forwards.