I tried posting this before, but couldn’t quite manage it.
That was back in the days when I didn’t know how to use this blog.
So I’m reposting it, but properly this time.

When Three Become One: The Union Jack is formed from the flags of the patron saints of three of the home nations.

As you no doubt know, Scotland has an independence referendum in September 2014. If the vote backs independence, the UK will go on without Scotland, of course (the United Kingdom of England, Wales, and Northern Ireland, that would be). But if Scotland does go, what’ll happen to the treasured Union Jack? Surely it will have to lose its blue background which represents the Scottish patron saint, Andrew. Not the most serious implication of Scottish independence, you may say, but it’s not totally insignificant either: after all, the Union Jack isthe main branding of UK plc. Furthermore, the psychological blow of having our flag bleached will surely be great.

The Anaemic Jack: The UK flag minus the field of azure.

But there’s no need for us to have an anaemic flag.

The current Union Jack, of course, is a blend of the flags of the Patron Saints of England, Scotland, and Ireland: that is, the crosses of St. George, St. Andrew, and St. Patrick. Many have proposed properly representing Wales, especially if Scotland leaves the union, by defacing the Union Flag with a welsh dragon (“defacing” is the technical heraldic term, by the way). However, the superimposition of the Welsh Dragon on the remains of the Union Jack doesn’t quite hit the spot from an aesthetic point of view. It also runs against analogy: the Union Jack is made up of the flags of the patron saints of the home nations. So why not incorporate the flag of the patron saint of Wales, St. David, into the Union Jack?

The flag of St. David.

So without further ado, I submit the following as what I think the Union Jack should look like in a Scotland-less UK. 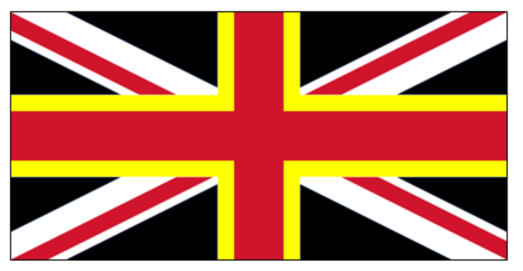 I personally think Scotland and England are both stronger together (surely recent sporting successes highlight this). So I hope Scotland and England remained wedded, in sickness and health, rich and poor, and so on. But if Scotland does become a sovereign natoion, there’s no need for the remainder of the UK to have a radically altered or feeble-looking flag.

We might wish to incorporate St. David’s flag, but leave the yellow out. This would give us a powerful red-black-white colour scheme.

And what if Scotland stays in the UK? We still might want to properly recognise Wales’ contribution to the union by giving us a new flag. In which case, add the yellow cross of St. David’s flag alongside the blue of St. Andrew’s.

Red, White, and Black: if the White Stripes designed a new UK flag.