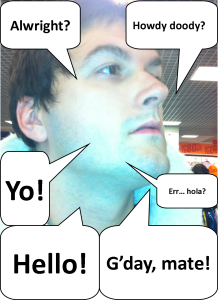 Project Polyglot Parry is me turning myself into a multilingual maestro. Unfortunately, despite being pretty regular on Duolingo, the graphic below(PROJECT Polyglot Parry March 2014) is still an accurate reflection of my language levels. How can that be possible? I’m where I was 22 months ago! Ah yes; a combo of not enough practice and not pushing myself enough when I do practice. Well, learning languages is on my 2016 New Year’s Resolutions, so I’ve got to get a grip. Enrolling on a class might be the way to force myself forward.

I don’t want to make excuses or put things off, but I am actually in the middle of several really important life things right now. I physically don’t have that much time. But I’m going to force myself to Duolingo again, effective immediate; I can do it on the bog (half an hour per language per day). Then I reckon in a couple of weeks or so, I can think about enrolling on classes and so on.

My ultimate goals for 2016 are to get myself the certificates and/or level of:

As much as I’m keen on Basque — I’ve always loved the language, my wife is Basque, we have a house in the Basque Country –, I decided to only focus on learning that when I am certified C1 in Spanish.